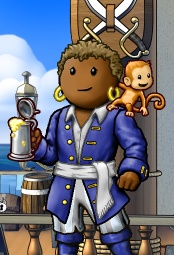 Hansel is a Senior Officer in British Sea Power in the flag Looterati.

Hansel won an orange monkey in the first Familiar Drinking Tournament on Midnight, in May 2004. His name is Julius, known as Jules for short. Jules loves Hansel dearly, but also enjoys spending time with Hansel's friends, particularly when they're in need of extra comfort. Hansel was quite new to British Sea Power at the time of the tournament, and along with the monkey, won his Officership on the strength of that drinking tournament result.

Hansel has a troublesome alt sister called Gretel, who likes to wear yellow and red, but has a personal challenge with a hearty to win all her clothing rather than buying it.

Hansel and Gretel are regular participants in the Olympic Champions League, with Hansel being a stalwart supporter of the Drinking League as part of Briterati, and Gretel taking part in the Team Brawl League.