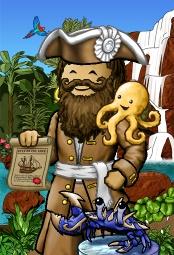 Gcfungus first played Puzzle Pirates on December, 10th 2006. He joined the Cobalt Ocean after a recommendation from a friend, wardit121. He subscribed shortly after and created his own crew the GC Crew. The crew never reached 100 pirates and in June 2007, he merged his crew with Plush's Plunders with Plush as the captain. On June 23rd, his crew merged again with Drague Familier.

However, Gcfungus quit in October 2007. 2 Years on, he rejoined in September 2009, now part of the crew Crossbones. Soon, he expanded Omega's businesses, and in late December earned the rank of Senior officer. At the start of 2010, Omega left the ocean temporarily, and they decided to split the businesses. He then, in early February opened up his own shipbuilding stall on Garden Cradle which proved successful in tandem with a foraging business.

Later on, with the introduction of limited edition ships, he became somewhat of a collector and collected one of every type of ship until he left the game again in Autumn 2010.

Returning again in February 2012 with the promise of a managerial position of a Ship Yard stall on Terra and a connected weaving stall by Johnmoris. Subsequently he resubscribed and set about managing the businesses. However this only lasted a couple of months before retiring from the game again.

On another return in December 2016 for circa one month, Cerulean (formerly Cobalt) was inactive hence he swapped to Emerald and started the ocean afresh.

He returned once again in October 2017, moving quickly to Obsidian on the dark seas where he formed a crew with Matsumoto (Golden Age) before quickly merging into Might is Right, captained by Jukem.