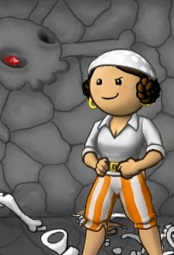 Firefrog is an officer of the crew Leviathans Requiem and a member of the flag Tea and Strumpets on the Sage Ocean. She has contributed to an in-game trinket, the Nutleaf boat.

Once upon a time, a pirate known as Firefrog ventured timidly onto the sea. Firefrog was quickly captured by a rowdy crew and puzzled away many an hour.

A long time passed when no Firefrog was seen upon any ocean. Yet at last, a new incarnation of the pirate Firefrog was seen once more. Usually found upon the ocean Sage, Firefrog plays whenever the call of a ship stirs her toward the puzzling keys.

At one time Firefrog teamed up with Addihockey to produce forum avatar artwork [1] , but is no longer attempting it.

Without intending to crew hop, yet a history of former crews is piling up. Former crews include:

It's been so long, she's forgotten the rest.