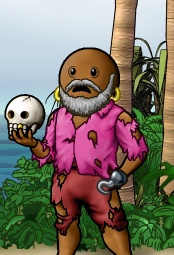 On the night of Sunday, February 11, 2018, Jazz the pirate hopped aboard his private ship and set sail for another adventure... and NEVER RETURNED. He is LOST FOREVER unless some pirates decide to put their heads together and solve a mystery!

This is an event page that organizes the clues and letters amidst the mysterious disappearance of Jazz the pirate. Designed to be the most difficult puzzle a pirate has ever witnessed, this challenge is not for the impatient or feint of heart. Jazz will never log on again if no one ever rescues him! Oh NO!

[[1]] CLOSELY Search the FULL-SIZED image of Jazz Marooned to unlock the first letter! This map may or may not be helpful again!

The following letters are messages in a bottle that are opened only when you have correctly entered the passwords for each. The passwords can be entered into the .pdf files themselves, otherwise they wont open. They contain clues and progression for uncovering the secrets of Jazz's disappearance.

Other things which have been found / theories

This man sitting on the PV Docks seems like a key character in this mystery...

This quest was solved by a group effort of Wreckie, Geologist, Vanleigh, Harrjm and Jonthecarper only 17 hours and 15 minutes after the event officially began.