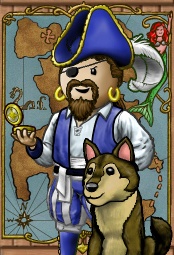 Deltaq is a pirate on the Midnight Ocean who began in November, 2007. After 2 months (if his memory is still functional) he found a fine crew in this ocean, where he started caring of the game and started to be part of the crew Wyndryders.

After some time, he met his actual captain while jobbing for her. She was Lailin of the crew Midnight Serenade and due to a good family feeling, he decided to join her crew.