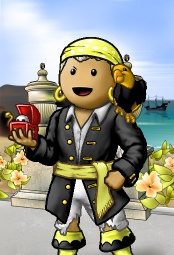 Dacheat joined the pirate world in July of 2003. He played very little until Midnight opened. He joined the Radical Dreamers gaining rank quickly and excelling as a puzzler, and sword fighter. Due to some internal issues in the Dreamers Dacheat left along with other Dream Reaper officers. He and Grimm founded The Castaways. The crew grew quickly, profiting hugely off Beta Island to Alpha Island wood trade. The Castaways joined Nyx’s Scion and Dacheat eventually found his way over to Arr where he enjoyed the high level of pillaging.

After Nyx’s failed attempt at Turtle Island, he took a leave from politics and rejoined the Radical Dreamers. Due to personal real life issues Dacheat left puzzle pirates in August of 2004. He logged on only once in almost two years to make sure his black yellow swashbuckler jacket was still in place on the rack at Apparel Barrel. He still has the jacket to this day, and wears it only for special occasions.

In July of 2006 Dacheat officially rejoined the world of puzzle pirates. He found his way to the few active Radical Dreamers left, most of whom are now housed in Pirates of the Damned. He quickly rediscovered his love for the numerous old puzzles, and the many new additions.