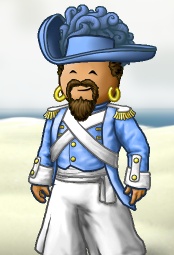 Chigaga first started playing Puzzle Pirates in mid April of 2009. Right now he is a pirate of the crew Rumor of War, in the Hunter Ocean. He is either called Chi, Chiggy, or Chigichaga as a joke.

On Chigaga's first days around Puzzle Pirates, he went on a pillage with the crew Tonnys German Pirates. After walking around the docks, he met with a couple players from the crew -Obliteration-. After soon learning that their flags were at war, he decided to join the crew that Klondor and Ayawin, the people that helped him out, which was -Obliteration-. In -Obliteration-, he made many friends, too many to name. While he was in -Obliteration- (Oblit. for short), a lot of drama tension was rising throughout the flag and crew. When many people started to leave the crew, one of his top hearties, Donuttime, join Cerne's crew, who used to be a senior officer in Oblit, Rumor of War. So since Chigaga was still somewhat new to the game and didn't know many people, he decided to go with Cerne and Donuttime. Right now pirates can find Chigaga pillaging or talking to people in the docks or inns.