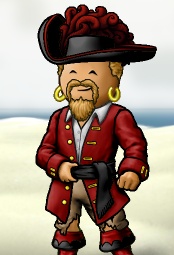 Catkin is a senior officer in the crew Slow Children at Play and he sails the Cobalt Ocean.

Catkin washed up on the shores of Sakejima island in late 05. He quickly found a love for sailing and was found on them more often then not when pillaging. He crew hopped untill he found one he liked. The crews he has been in include: Serial Pillagers, Shank Sharks, Metal Roses and Slow Children at Play. He developed a love for Swordfighting later on in the game after learning the tricks of the trade. He is usually found at the poker tables or pillaging.

Some of his goals in the game include-