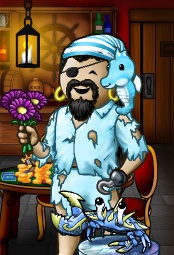 Capinsav starting playing puzzle pirates in late October 2007 on Viridian, and has been in many crews and done many things in his puzzle pirates life

It is widely known that Captinsav is the account owner of "Sardinez". This was backed up at Some olive blockade where he was third partied and admitted that it was wrong of him.

Being the ownerr of the account got him banned which sucks but ohwell.