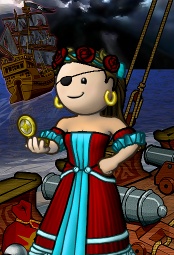 Callera started her life on the Midnight Ocean in the summer of 2005. One day she was jobbing on a ship with Flutie and Jackington, they asked her to join their crew and she did.

Being an officer terrified her, but Jackington kept after her, telling her to work on Gunnery which she absolutely hated. Finally when she had her Gunnery up to narrow, Jackington assigned one of the officers to train her. But the timing was bad. Blinky was really busy with work and the crew was falling apart. This was before the battle navigation missions had been implemented. Callera then went to the test Ice Ocean to finish her training where no one would be able to see how terribly she performed.

After Floating Circus broke up Callera wandered around in other crews, but the story was always the same. People would slowly drift away until it was just her in the crew. Then one day she ran into Flutie who told her how she had reformed Floating Circus. Callera joined the new Floating Circus and has been in this crew ever since.

Callera started her life on the Cobalt Ocean in the winter of 2005. She was wandering around and one day she ran into a pirate named Korthuis who told her how he was planning on blockading Tigerleaf Mountain. Callera joined his crew Eclipse and it was a vicious blockade that they lost and most of their ships were sunk. Callera lost her hand that day and stayed with the crew after Korthuis retired.

The crew went through several really wonderful captains finally ending with Bigwood. The crew grew and grew to be one of the largest in the ocean. They blockaded again with lessons learned and a larger fleet and were successful.

Callera does not like crowds and often finds herself lost in large crews. This was when she joined the crew of one of her hearties Rileymon named Dream Catchers. It is a small close knit shopkeeping crew that Callera stayed in until everyone retired. Being lonely and restless she and joined the crew The Sea Warriors.