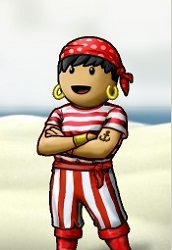 Bordercollie is a senior officer in the crew All for One and is currently a prince in the flag Indifference. He is a exceptional patcher and is working on broadening his swordfighting skills. Bordercollie is a great crew mate who is there for everyone no matter what! He is a peoples person and contributes knowledge when and if needed. He is always willing to help out a crewmate in need!

Bordercollie first joined Puzzle Pirates in mid-late 2006 on the Viridian Ocean. He joined many crews on his journey, including Rolling Thunder and Happily Deranged, and it was during this period where Bordercollie learnt how to puzzle and pillage. In late 2010, Bordercollie stopped playing Puzzle Pirates due to his studies. Unfortunately, all his pirates were purged soon after and when he started playing again in late 2013, he had to start fresh. Bordercollie first joined the crew Pure Luck which soon became dormant, as a result, he changed crews to All for One where he quickly rose through the ranks as a result of his dedication to the crew and flag.

Check out his awesome guides! https://www.youtube.com/channel/UCFEzR2vtBYiEh_XaIVp3gsA