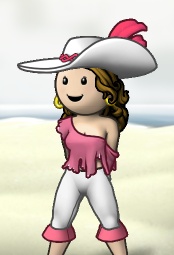 Blessedangel was a pirate on the Sage Ocean. This pirate has retired.

Blessedangel was one of the founding members of Greed's Ambassadors, but left the crew about 6 months in (around the same time as Blackvixey and Fisherman) to try her hand at being captain and queen following some internal strife within Greed's Ambassadors.

She was handed the crown of Illium Eternae by Docwho and helped to lead the flag to greatness and a long time on the flag fame list. After a while Blessedangel left with her crew Loyalty's Dreamers started the flag Calliope's Awakening. After a couple months she decided she was burning out and handed over her flag and crew. Thus she returned to the true crew of her heart, Greed's Ambassadors. On April 15th she and Mortified were joined together in a hasty and yet quaint ceremony in their shack.

Despite her legendary fear of Gunnery, Blessedangel was one of the favorite opponents of any brigand on the ocean.