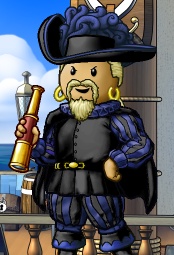 Blackrune has been playing ypp for a long time and is a well respected leader of his crew and flag. He is most notable for his Battle Navigation, Gunnery, and poker skills. Anyone getting sassy with him especially about the bots "denting his dingy" will be firmly given a "Hush U".