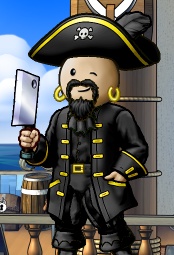 Blackbone is a talented trader and as such was given responsibility for ensuring that the Isle of Kent be a stronghold and profitable home for Notorious. He has managed the Isle of Kent brilliantly for the flag that he remains loyal and committed to.

Blackbone has a reputation as one of the most consistently kind and generous pirates on Sage.