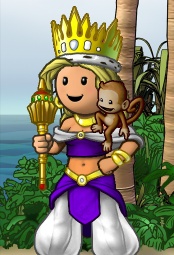 Bertiepye was the captain of the crew Honest Buccaneers and queen of the flag Sotto La Luce on the Midnight Ocean.

Bertiepye was created in January of 2007. She was an alt until she decided to make a crew. Her main was Bert, but is now an alt. Bert started in July of 2006. Bertiepye, like everyone else, was a greenie when she started off. She did everything to make her crew happen. And she did it. She is captain of the crew Honest Buccaneers. She loved her crew, and took care of it as best as she could.

And for a little while, her crew actually got up to eminent, and for about an hour it became illustrious. Her whole crew and flag shouted with joy at the progress that they had made in making Honest Buccaneers a great, fun, and one of the best out there.