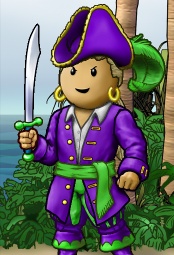 Belgarion is an active contributer to the puzzle pirates community. His primary ocean is Hunter.

Belgarion is one of the winners of the Design the Oceans Contest.[1] His excellent design work can be seen at the following islands:

Belgarion is also the current maintainer of The Shop Tool.

Belgarion joined Puzzle Pirates late in the beta period, just before retail launch. Recruited into Black Opal, he proved his worth as an officer and eventually became a senior officer of that crew. During their time in Silver Dawn, Belgarion won his crew's appointment as their royal representative on the council.

After leaving Silver Dawn and joining Notorious Fandango, Belgarion has continued his contributions and retained his regard. During the Fandango occupation of Guava, Belgarion was governor of the island.