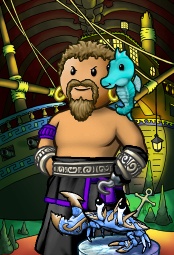 Badducky is a senior officer of the crew Pirate Lords and prince of the flag The Brethren Court on the Midnight Ocean. Badducky has won 4 crabs in his journeys to Atlantis. Crab one is atlantean and bronze and named Royal Bad Crabby. Crab 2 is aqua and gold and is unnamed, crab 3 is navy and bronze and is named JOJO, crab 4 is black and gold and is unnamed. He has also won 3 ippolitos, all are unnamed and are aqua, navy and white. He has also won a serphent and a parrot.