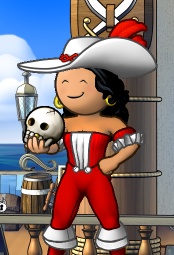 Arpazia's exact date of arrival upon the Sage Ocean is currently unknown and debatable.

Arpazia came to the Sage Ocean as an aspiring cabin girl. She was first marooned upon a mysterious island only to be found by a Greenwich Island Navy sloop that happened to wander close to the isle. From there she learned how defend herself in a Swordfight and become useful on ships.

For a period of time, Arpazia drifted aimlessly from crew to crew, waiting for the right mates to join up with. Eventually, she met a new captain looking for members to add to his crew. In this crew, the Ottoman Armada, Arpazia advanced in rank, slowly gaining trust and experience until she was promoted to fleet officer.

Unfortunately, the crew took a plunge as the captain took off for long periods of time. Soon, the Ottoman Armada merged with another crew, the BLOODSCALE DRAGONAUTS, under the leadership of Whitewillie. After changing flags a few times the crew decided to also change their name. So the BLOODSCALE DRAGONAUTS became known as Stench of Death in the flag Recurring Nightmare. Once again, change was inevitable. Arpazia simply drifted with the change of crews merging or splitting, becoming of a higher or lower status(See Rankings) and continues to naively hope that her next mates will keep together longer than the last.

Arpazia has managed to keep her ranking as an officer, despite the many changes her crews have gone through. Arpazia occupies her time by participating in tournaments, defeating skellies, solo pillaging in her ship, the Harsh Pike, and avoiding battles with barbarians.

Arpazia puts into port at Greenwich Island in the Pelican Archipelago.