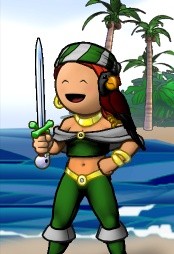 Ara started playing on the Sage Ocean on August 25th, 2005. She joined The Lost Lot during her first week. She was promoted to pirate for giving another crew member the doubloons to buy a labor badge. After several months, Ara was promoted to officer and later to fleet officer.

When The Lost Lot's second captain, Scarymuffin, moved the crew from their home in The Light Brigade to Go With The Flow, Ara left the crew in protest. During this time away from The Lost Lot, she went to the crew Power of Moonlight in the flag Morbid Intentions which was led by Necro and Marux. Shortly after arriving in Power of Moonlight, the crew split in half and Ara returned to The Lost Lot.