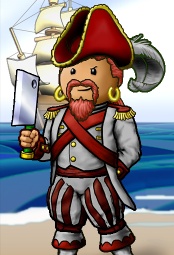 Andrewcal is a senior officer of The Lost Buoys on the Cerulean Ocean.

Andrewcal started in the Azure Ocean, where he started his own crew called Elite Warriors. At the start of the Midnight Ocean he dropped Elite Warriors and joined Band of the Hand. After a few weeks there, he left and became a part of Monkey Face Fighters. In that crew, he met Darkcarrie, with whom he started the crew Dark Raiders. After a couple of months he took a break from the game. During this time his mate Darkcarrie left the crew and joined Aramis in The Heretics.

Andrewcal remained with The Lost Buoys until the time of the ocean merge, at which time he moved from Midnight to the newly-formed Cerulean Ocean. You can find Andrewcal on the docks of Hephaestus' Forge or in his villa.