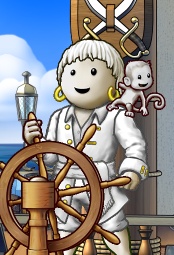 Shuranthae is a very well known pirate from the Midnight Ocean, who started playing during the beta development stage on Azure.

Shuranthae is just one of those names that everyone knows. This is partly due to the character's iconic albino appearance resulting from his days in Azure, during the Y!PP beta testing period. As Shuranthae on Azure was an entirely black character, both in complexion and clothes, Shuranthae opted to make his Midnight character the polar opposite - entirely white.

Another reason for his fame is probably his ultimate skill across the entire puzzle skill set. The name Shuranthae is synonymous with the adjective incredible, as anyone who has pillaged with him will know. He is also widely regarded as an excellent battle navigator in PvP, against brigands, and in blockades.

For a long time during Midnight, Shuranthae remained crewless. He would occasionally join random crews, or start his own one-man crew, but nothing was ever permanent. However, since 2005, he has remained in Crimson Tide, changing crews only for blockade purposes.

He won a grey monkey in the Sailing Bake-off! of March 2005 on Midnight. In November 2005, under the alt Slythe, he won a lime/pink parrot on Cobalt in an automated drinking tournament. He then held the parrot ransom for as much rum as could be fit on a single ship.[1] Under the alt Saelin, Shuranthae won a blue/maroon parrot on Viridian in November 2005 and held a contest to give it to the winner of a Lowest Unique Number Auction.[2] In January 2006 he won the Sage Sailing Bakeoff as the alt Elolle but declined the prize of a green octopus. The familiar was given to the second place winner, Zava. In June 2006, he won a gold octopus in the Viridian Sailing Bake-off on the alt Saelin. In July 2006, he gave away a gold octopus via the Ye Booched It! contest to Nemor.