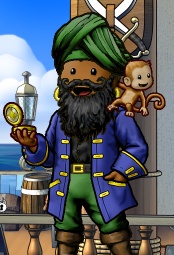 Nemo does various pretty artwork for the game and is the head honcho of island-related aesthetic issues, such as when buildings are allowed to be closer to the docks.(verify)

The name Nemo originates from that of a submarine captain in Jules Verne's books, Twenty Thousand Leagues Under the Sea and Mysterious Island.

The following artwork has been drawn by Nemo.

In 2005, Nemo designed various t-shirt options that were voted on in the forums.[7]