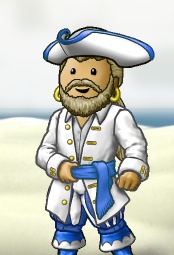 Riz was the first pirate of the player of the same name. He was born Nov 20th, 2004, and spent but a single day as a greenie before immediately recognizing this would be a game he would be playing for the long term, and buying a subscription. Many sails in those early days with Ladynautical and Pete formed the basis of a lasting friendship, and the founding of the crew Managed Mischief, of which he was an original member. The pirate Riz exists on all oceans except Opal, but is only played with any kind of regularity on Midnight and Ice. These days, he can more frequently be found on his alt, Rizeta.

Rizeta was born in late 2005 as an alt for Riz, primarily for checking commodity prices in the Ruby Archipelago. He was born on and remains based on Eta Island, hence the name. When Riz's crew became idle, he was jobbing frequently with the crew Don't Ask To Port, so he joined that crew with Rizeta, first as a Fleet Officer, and later as a Senior Officer. When that crew also went idle, Riz the player left the game for an extended period. On his return in mid 2008 he discovered that many of his favorite mates from DATP had formed the new crew Six Pounders, which he then joined, and there he remains today.