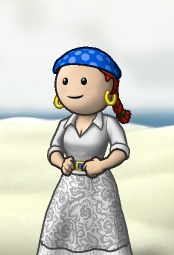 Clamchowder is a pirate on the Sage Ocean. While her stats are pretty bad, Clamchowder plays Puzzle Pirates more for the fun and novelty of the game rather than for recognition.

As a greenie, Clamchowder had joined and left countless crews before finally finding her home with the White Knights which became her crew for her first three months of actively playing on Puzzle Pirates. From there, her she achieved the rank of fleet officer, but then a series of unfortunate events led Clamchowder to leave her favorite crew and join No Submission with her friends Esio and Aurayasula, who had also left with her.

In No Submission she was made an officer. She made more hearties and friends. She admired how the captain of the crew, Yohoahoy always placed his crew's views into consideration before changing flags. Life with her new crew was full of drama and Clamchowder seemed to find the petty disputes that seemed to occur everyday with No Submission hilarious. However when Clamchowder logged onto her alt, Clam, she was surprised to find out by reading the crew issues that the flag had participated in a blockade without her knowledge.

She was then reminded that she should rejoin her previous flag, White Knights Of Sage, a task easier said than done. None of the other crews on the flag suited Clamchowder's wants or desires as a crew. Luckily for her, Starsailor told her that Loryx had also left White Knights and was making his own crew. Clamchowder checked the crew's info page, but was apprehensive about the Jobber's Delight pay. Jobber's Delight would mean the end of her giving the jobbers a +1 in her pillages unless it was for a really good reason.

Her current aims are to play poker better and to earn enough PoE to buy a sheep. Her favourite parlor game is Hearts and her best piracy skill is Sailing. She also owns a rat called Clammed Up.