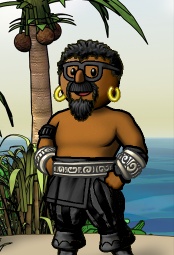 Zifter is a warm, loving and friendly pirate that loves Poker, Gunning and Battle Navigation.

Zifter began his pirate life in May 2006 on the Sage Ocean.

He eventually joined Shooting Stars of Sage, where he met Noushka and Waxhead amongst others. There, he rose to the rank of Fleet Officer, several months later, he became inactive. Zifter then returned as a fresh pirate years later, he searched for a new crew, after discovering that many of the people that he knew and loved in Shooting Stars Of Sage had, like him, become inactive or dusted.

Luckily, he found Noushka again, and he joined New Dawn Rising, the crew that she had moved to after leaving Shooting Stars Of Sage. During his time at New Dawn Rising, Zifter befriended Priatecat and soon became a fleet officer once again. Several months later, his "AFK life" began to take a hold of him and he became inactive. His character disappeared for the second time.

Zifter returned once again and joined Priatecat's own crew, Rectitude, in July 2010. This is when he met first met Yourcharm, a senior officer in Rectitude. Almost a year later, in July 2011, Yourcharm left the crew to create his own, he called this crew Rough Hands, and Zifter joined it and assumed the role of senior officer. In March 2012, Zifter took over captaincy of Rough Hands from Priatecat, during Yourcharm's extended leave of absence.