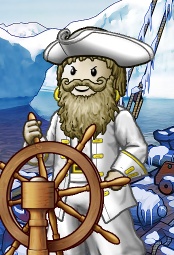 Whitemonkey first started playing YPP during the Christmas break of 2005. He soon became highly addicted and played far too much. Luckily being a lazy student in real life, his YPP addiction had plenty of time to feed off.

After wandering the Sage ocean for some time, he soon had a pillage with Seshomaru of the Black Sage Marauders and was entertained by the lively conversation, humor, niceness and large amounts of poe won. He then decided to join.

Not too long after joining, he was promoted to pirate, and soon became a well known loveable figure in the crew, always up for a chat and a pillage.

Not too long after becoming a pirate, he was offered the chance of being an officer, which he quickly took (unsurprisingly) and became a bane to everyone else in the /fo chat. After his promotion to Officer, Whitemonkey quickly became his captain Redbalaylay's choice of XO as he is a harsh, but fair quartermaster. With this (and the fact that he doesn't overly suck at bnav) in mind, the powers that be (SOs and Redbalaylay) deemed Whitemonkey suitable for the role of Fleet Officer.

After about a month at the role of FO, the powers that be again decided to promote the monkey of white to Senior Officer, as he was online far more than any of them.

He is well known for his spamming of the FO channel with requests for selling tickets for the Flag Lotto and one day wishes to win or buy a white monkey for then the humor would be wonderful.

In the March 2007 flag elections, Whitemonkey was voted in as one of eight royals.