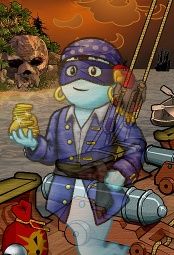 Poochy is a senior officer of the crew Carpe Diem on the Viridian Ocean. He is the owner of the Wrong Ship, a sloop which he had renamed solely for comedic effect. ("You have intercepted the Wrong Ship!")

Poochy originally joined Puzzle Pirates in December 2003, before the advent of the doubloon oceans. He loved the game, but at the time, non-subscribers were limited to a trial period of 10 logins, and Poochy did not have a credit card. Two years later, he discovered the doubloon oceans, and has been playing the game ever since.

Always having had a love for puzzles, Poochy always focused on the puzzling aspect of the game, striving to improve his rating and skill at the piracy puzzles.

In swordfighting, Poochy considers himself a foil specialist. He does own some better swords, including a falchion, but he rarely uses anything but a foil outside of tournaments. He admits that his weapon choice is arguably insane, but he still uses a yellow/yellow foil for skellie fights, and refuses to believe that it may be the reason why he can never seem to get in a winning fray. However, Poochy is still an avid fan of skellie fights, and used to track skellie spawn times and log on for the express purpose of fighting skellies until the spawn times were randomized.

For a while, Poochy was also one of the top Rumblers on Viridian, having consistently held a spot in the top 10 of the Ultimate list for several months and having peaked at #2 (mainly because Boothook, who could beat the barnacle out of him with one bare fist and the other hand tied behind his back, went inactive). However, note the use of past tense in the previous sentence. He has since declined in activity at the Rumble tables and in the game in general, so his skill has atrophied and his Ultimate is usually inactive (and thus not listed on the rankings).

In general, Poochy's best strength is his ability to think very fast and efficiently. His biggest weakness is that fatigue seems to set in quickly at the duty stations, causing his performance to deteriorate if he plays for too long without switching stations or taking a break.

Poochy also thinks it feels weird to refer to himself in third person, but he supposes it can't be helped.

In recent times, Poochy has declined greatly in activity on Puzzle Pirates, due to not having as much spare time, in addition to having developed a new puzzle game addiction to Tetris: The Grand Master 2.