Yohoho Tools is the Puzzle Pirates scene editor (also known as the Island Editor). It is used for various contests such as Beat the Champs (Island Design). There are currently no plans to update the software as it is a low priority.

It is not directly tied into the game, so it cannot be used to alter Yohoho! Puzzle Pirates. 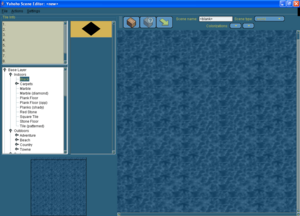 Download the official editor for your platform (Windows, Mac or Linux):

If you find you're having difficulties getting it to run, especially if you're not running Windows, check the links below.

With the latest versions of Yohoho Tools, it is unlikely that you will need to patch it. However, if you find your editor does not have the most recent objects (such as the snow pirate, Easter eggs (2008), and so on), then you can download this file. (You'll probably want to right-click, save As, but it doesn't really matter). Save it somewhere you can easily find it again. Note that the editor is receiving more frequent updates these days, so patching will likely not be required. Use this file if you want to update your tiles off the Ice client.

System Requirements for the patcher

To run the patcher, you can either double-click it, or open a command prompt and run it that way (which will allow you to peruse the logs, should something fail). You will be asked if you want to skip copying the files. Answer N if you are not getting all the most recent tiles from the game (which is almost always the case).

The rest of the script should operate normally, and you should not see any errors. If you do, please copy and paste the error to this forum thread.

If you absolutely cannot get the official download to work (again, under Windows), then you may download Emerson's pre-built, patched editor, which can be downloaded from here (26MB). Bear in mind that this is rarely updated, so even after you install that one, you will still need to patch by the method mentioned above.

To install Emerson's version, after it is downloaded, double-click it, and make sure to extract to C:\. This will cause the self-extractor to place the files in the default installation location of the editor. If you extract anywhere else, the paths will be broken, and the editor will not work.

The most common problem with the alternate patch is the inability for the desktop shortcuts to locate Java, due to the fact that not everyone is running the same version. The fix is relatively easy, but can be intimidating to casual users.

Right-click on your Puzzle Pirates game icon, and select properties. Copy the entire entry from the Target text box, which should look something like this:

Paste the relevant one into the Target text box for the Yohoho Tools shortcut, and the tools should then work.

Yohoho Tools can be used to create exterior or interior scenes using the same graphics and rendering as the game client.

Yohoho Tools is mainly controlled with the mouse, though a few keyboard shortcuts exist.

Keyboard shortcuts include ctrl-N for "New," ctrl-O for "Open," ctrl-S for "Save," ctrl-Q for "Quit, " ctrl-D for "Make default base tile," ctrl-shift-C for "Display object commodity counts," and Ctrl-; for "Preferences."

Menu items can be found under the "Actions" menu bar at the top of the interface.

Or just do a search for "Yohoho".
If the screenshot doesn't take, try again or make your island smaller!

Yohoho Tools utilizes a two-layer system: a base layer and an object layer. To create a new scene, navigate to File, then New.

The base layer is composed of all the ground tiles used to create the shape and textures on your island. Almost all base tiles can be walked on by players. Exceptions include water, lava, bog and fissures. The eight tiles adjacent to a single tile of any of these types are also un-walkable.

The object layer contains objects that are used to populate the island, such as plants and buildings. Objects are obstructions—no matter what the size—and players cannot walk on them. Generally, objects disappear when another object (such as a building) is placed on top of them in game. However, some objects—including herbs, minerals, and cliffs—will not allow buildings to be placed on top of them.

For more complete information on the actual creating of an island, please check out the island design guide

To successfully save your island, you will need to have accomplished the following:

Converting a scene from the client

You can find the correct scene file for an island by searching in the scene directory for the file containing the text name of the island you are looking for, like "wrasse" or "cnossos". Finding scene files for rooms of buildings or vessels is more difficult; you can search for the room name, like "main hold" or "attic", but there are likely to be many of these. Another way to find scenes is to open the ocean's scene folder and delete most of the scene cache, like all the files with numbers over 1000. Then visit the scene in game. The most recent new scene you visited will be the most recent file in the directory.

The scene files are frequently out of date, you can force Puzzle Pirates to update the scene file by deleting it and then going to the corresponding scene in game.

Once you've found the scene file(s) you wish to use, you will need to have them in XML format. The scenetoxml batch converter used to work for this purpose, but the file format has changed, and scenetoxml will not be updated to read the new format. Please read on for information on SceneHaul.

SceneHaul is another scene to XML converter capable of reading the "new" scenes. It can be downloaded from the author's site.

It is written in Java and will search the cache folders for scenes and convert all of them. To run it needs to be put into the installation folder of Puzzle Pirates. Run it from the command line with

A window will open and show the progress of conversion. After conversion you will find a new folder (directory) scenes_xml in the program folder. The files in this subfolder are XML files suitable for direct use with Yohoho Tools.

Yohoho Tools is now regularly being updated as additions to the game are made; you should no longer require the use of a patcher, unless you are on the bleeding edge of island design.

A new fix to the getdown.txt problem is stated on Margara's post here