Swordfighting is the noble art of pirate combat and can be struck up via a puzzle challenge, an appropriate parlor game table, or after grappling with an enemy ship at the end of a Sea Battle, much like a Brawl.

A swordfighter groups the falling pairs of blocks into colors, then uses the corresponding breaker pieces to shatter the groupings and send vicious sword attacks to his foes. These attacks fall onto the victim's screen as either silver pieces that slowly turn to breakable colors, or the more sinister and potent swords, which hack through other pieces before breaking into silver blocks. Balancing your board so that you can both build large attacks to shatter and have space to defend against oncoming strikes is the key to effective Swordfighting.

When Swordfighting, pieces fall in pairs from the top of the screen. You can move the falling pieces with the keyboard as follows...

Pieces come in four colors, and there are two different types: solid pieces, and cutout "breaker" pieces that cause shatters. 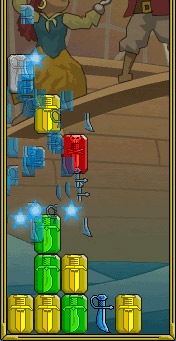 Of course, at the same time your opponent will be shattering pieces and striking blows against you, at least if they're not a lily-livered coward quaking in their boots.

Sword strikes made against you fall on your puzzle as silver swords of varying size. After your next drop, these swords will break into silver 'damage' blocks.

On the next turn, those silver blocks will show a sword image, like that of regular pieces but without the color. Finally, on the fourth turn after the initial strike, the revealed silver blocks will turn into their respective colored pieces and can be shattered or joined like any other block.

When an attack contains shattered pieces that were not formed into large blocks, individual silver pieces are sprinkled onto the opponent's board on the first drop. Because these have skipped the sword stage, they revert to their normal color on the third turn after falling.

Using Damage Pieces to your Advantage

These silver damage pieces may be very frustrating, but they can also work to your advantage if you know what color they will turn into. In this manner, you can actually use your opponent's attacks to build up your own! To accomplish such daring feats of strategy, you will need to carefully study your opponent's strike pattern, which is determined by his sword's type and color.

In order to inflict devastating blows, the diligent student of Swordfighting will need to master the art of creating large solid blocks of a single type of piece. Even better is shattering multiple large blocks in cascading chains of shatters.

When pieces of the same color are placed together in arrays of two by two or more, they solidify into a single block. When these solid blocks are shattered they send full sword blows to your opponent, rather than the wimpy single pieces referred to as "sprinkles". The larger the block, the greater the sword that results.

Note that vertical blocks will produce vertical sword blows when broken, and horizontal blocks (which are somewhat more difficult to build) create horizontal sword blows, which can be devastating at the right time.

A more advanced layer of Swordfighting strategy is the use of chaining, or "combos". Chaining is done by setting up shatter pieces within your board so that setting off one shatter event causes another (and, perhaps, another, and another...). These chains multiply your attacks by their order in the cascade. The puzzle will display the multiplier as the chain progresses ("Double!", "Triple!", etc.)

Pirates new to the oceans start their adventures with a basic sword: a "Foil". Other sword types can be acquired in the game, either from other pirates or by ordering them from the Iron Monger. Different swords have different strike patterns, which can be seen by mousing-over the sword in your Booty panel or in a trade window:

As you can see, these different kinds of sword have different strike patterns. The color of the guard and pommel determine where the four block colors fit within the sword's pattern.

Strike patterns work from the bottom up. Using the long sword shown below as an example, were you to send a strike at your opponent that falls in his second and third columns, the result would look something like this...

Sprinkles work a bit differently. While they are still mapped column to column like strikes, they only use the bottom two rows of your strike pattern when determining what color block is dropped. Thus, single sprinkle pieces take into account only the very last row of your pattern.

Analyzing and reacting to the strike pattern of your opponent's blade is central to the mastery of Swordfighting. Knowledge of a blade's abilities allows you to use its strengths against it! As any pirate worth his salt knows, however, no amount of book learnin' will make a Dread Pirate out of ye. So get practicing!

Some swords are clearly better than others for certain play styles, but there is no clear consensus about which is the most deadly of blades, and different sword masters have their own preferences. That said, no sword will guarantee a win and even the lowly starter Foil can be devastating in the hands of a master swordsman. Thus, any new blade that you choose for yourself should simply fit in with your own play style and the theme of your pirate.

While many have studied the intricacies of sword construction and use, debate regarding the nuances of each sword is beyond the scope of this missive. Instead, here are some simple guidelines to make finding your weapon of choice a little easier...