Ahh, the old piratey game of drinking! Ye'd have to be a belly-crawling wharf rat to turn down a drink with yer fellow swaggering sea dogs. Drinking is a game for 2 to 6 pirates where the objective is to rack up the most points. Points are made by slamming down more of yer own drinks in a line than yer opponents. But only cups of the same shape or color can be dropped next to each other. If yours can't fit, ye drink! 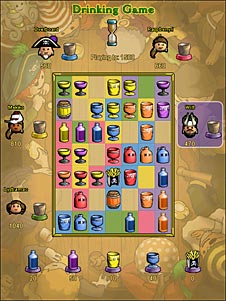 Drinking games can be started by challenging another pirate as usual, or by finding a suitable table and starting a drinking game (either a drinking table or a parlor game table). Once you and your fellow drinkers are arrayed around the drinking table the game begins. The pirate to move first will be selected randomly, and then all others will follow in a clockwise fashion.

Drinking is played entirely with the mouse. When it is your turn, first click on the drink ye wish to place and then on the space on the board in which you wish to place the drink (if there is only one drink option then you only need to click the board space). If there are no moves available, or you wish to drink a drink, then click on your head to drink it.

Drinks may be placed on the board in a legal move if all of the pieces next to them (horizontally or vertically, but NOT diagonally) are either the same color, or the same shape, or both. As more drinks are placed on the board the number of available positions is reduced. Since a placed drink has to fit with all the pieces next to it, it's possible to create situations where no drink will fit. Fortunately, chips which will fit anywhere on the board, and hooks which can remove a trouble piece, will come up eventually. Each player has a short amount of time, as shown by the hourglass, to make their move. Should the time run out, then that player will automatically drink the selected drink. There are four different kinds of drink pieces:

You will notice that when you place a drink, not only does the receptacle stand on the table, but also the square is stained with your color (as shown on the coaster by your pirate's face).

The drinking game is all about scoring points and preventing your opponents from scoring if possible. There are four ways to potentially score points in drinking, depending on the rules chosen:

The majority of points to be had in drinking are from forming rows and columns of pieces sitting on more of your stains than anyone else's. In the following examples, the players' colors are cyan and yellow. So, as illustrated here, the yellow player with four drinks placed in a row is almost assured of winning that row, since there are only seven spaces within a row: 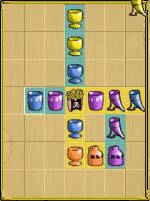 When a row or column is completed all the drinks are cleared away, leaving behind the stains. Once cleared away a new drink can be placed in a square, changing the stain if it placed by a different player. Thus in the scenario above, the cyan player could complete the column, clearing one of the drinks from yellow's row. Then, if he is lucky, on another turn he can put his own drink in the vacated space, undermining yellow's dominance of the row. If his luck holds out, cyan can then place a fourth drink in that row, winning it for himself (4 drinks to 3). 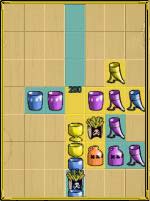 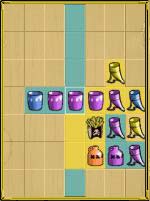 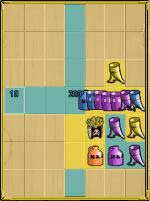 Three Drinks and ye're out cold!

Of course, the drinking life is not without its hazards. Should you be unable to place a drink on the board you must drink it! You may also choose to drink a drink, gaining that drinks point value and stopping other pirates from using that drink. This can be done by clicking your head, clicking the right mouse button, or by waiting for the hourglass timer to reach zero. Each pirate can cope with three drinks before he passes out -- after the first drink he gets tipsy, after the second he gets drunk, and after the third he passes out.

If a pirate passes out, he will lose one turn. After skipping a turn, he will hiccup and wake up still drunk, so be careful of your intake when near the edge. Placing pieces without drinking will slowly decrease your pirate's level of inebriation. If all the pirates in the game pass out at the same time, the round does NOT end, but continues after they shake it off.

Player mugs may be purchased at the local distillery, and will give their holder a unique power in the drinking game. Note that choosing the classic drinking configuration means that no player mug powers will be used, regardless if they player has one equipped or not. The player mug powers are as follows:

There are two choices for end conditions in a game of drinking that may be configured when creating a table:

When the end condition is met, the player with the most points wins the game. Keep in mind that if the "entire board" stain bonus rule is chosen, the player who reaches the point total first may still lose if the board stained bonus makes her opponent have a greater total point amount.

To succeed at drinking one must focus on winning rows and columns, while also preventing your opponents from doing so. Try to "lock up" yet unfinished rows or columns early by getting a clear majority of stains in your color. Also, try to block your opponents from being able to complete rows that they've "locked up" by either placing pieces that make the fries the only option for them to complete their row, or by completing columns that will take pieces away from their once locked up rows. Remember that stopping your opponents from getting the unstained x2 multiplier on rows that they've locked up is a great way to limit their points, even if they still win the row on an already stained piece in the end. Lastly, if you are playing with the entire board stain bonus, in a close game the final board bonus can become very important, so it's worth trying to place drinks on blank tiles or on spots that are stained by your opponents' colors.