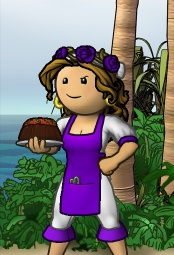 Never seen in anything but purple, Yohococo is the current captain of the crew Seven Deadly Sins on Sage Ocean, and was formerly the captain of The Crazy Coconuteers. She is also the princess of the flag Raving Notion and was formerly the Queen of the recently disbanded flag Dragon's Wrath. Hobbies include trying to regain her lost Ultimate standing in gunning, the old game of dock-tarting (being the queen of it), and on a rare occasion pillaging. She just recently married Gramps, Captain of Monks of Corruption and Lord of Raving Notion, and has been enjoying the married life thus far.Yohococo dreams of having a purple familiar and the #1 gunning trophy.