Difference between revisions of "Where's That Ship"

Where's That Ship is a simple cross-platform console program to help players find ships quickly. It is designed for quickly scrambling the nearest vessel to intercept an unfortunate target during times of war. This means no more scanning down the dock list or setting off on wild whisking adventures to find where the crew PvP ship has wandered off to. It will also produce some crazy facts and figures about the crew fleet and ocean in general - handy if the hunter is short on reading material and there's a long wait before the target appears.

It is inspired in part by Track All Yer Ships, a spreadsheet which provides an overview of a crew's fleet. 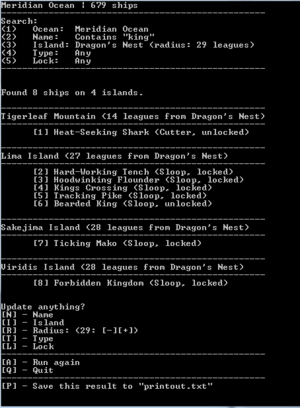