Ahoy! My main pirate is Knirt in the Viridian Ocean, and i´m Fleet Officer and Alchemist of Spammers Inc. a crew from P4P. I got enough of pillaging days, i will not join your crew nor even your flag. 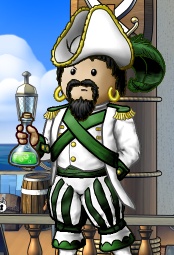 I really do enjoy helping new mates to find their way in the game ^^.

I started to use Wiki when i found my pirate name on it, but i saw a broken link. So I started to create pages for my crew, flag, pirate, and all these kind of things ^^.

I am nice and polite, except to people who can piss me off. Well, if you is able to do it, you may have a hell of enemy. People who are rude and this sort of things are more often ignored by me.

Knirt was an active user around 2006, having stopped playing the game in late 2006. He still checks the game every now and then but has been inactive for most of the past 14 years.