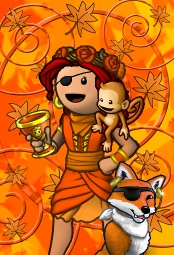 This is the year the Kraken was released. Fun Fact: Trinamy was the very first person to win a Black Octopus on Emerald Ocean. Pirates could always find her on a Kraken boat that year.

They had a curse on Flags, every flag that they joined would explode and fall apart. They finally found their perfect fit in the flag I-N-K.

Trinamy's hoarding of Puzzle Pirates furniture has begun! It can be viewed in a Gallery on Aimuri Island.

Trinamy is now 4 years old! We've been seeing more and more of her lately. She's out meeting new friends and joining in on Sea Monster Hunts once again. You might even see a furniture sale pop up on Admiral Island from time to time.