Difference between revisions of "The Widow Queen" 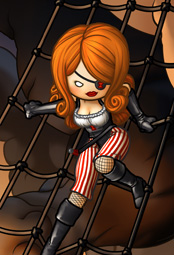 The Widow Queen is one of the original five Brigand Kings introduced to the game in April 2006. Like most brigand kings, she can be fought in either a swordfight or rumble. She is captain of the crew Silken Sirens and Queen of the flag Black Veil. On the Opal Ocean she is known as Die Witwen-Königin and is captain of the crew Seidene Sirenen and Queen of the flag Schwarzes Netz.

Note: While there have been posts in the forum done under the guise of the Brigand Kings, these are unofficial postings made by players that are not Oceans Masters or any other Three Rings staff and are not approved.