Difference between revisions of "The Black Company" 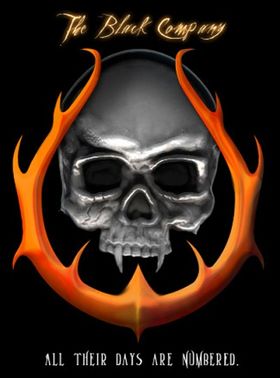 The Black Company is a defunct crew on the Sage Ocean. The crews flag is Critical Mass. Its captain is Etrigan.

The Black Company was formed by Etrigan in order to seek out and find lots of pirates to join him on his quest for the fourth defeat of the Black Ship, El Pollo Diablo.

Etrigan came up with the name for his new crew after reading The Black Company, a series of fantasy novels by Glen Cook.

If you can weather through the storm and never show me slack;

and if you’d fight beside me and could say “I’ve got your back;”

and if you’d show me courage when outnumbered ten to one;

and if you know your limits and know when it’s time to run;

and if you’d give one hundred ten when you have gave your all;

and if you’d fight on to the end although you knew you’d fall;

and if you can do this and more then maybe you’ll just be,

a pirate who could hear the call of the Black Company.

All ranks will be handed out based on your experience and ability. All promotions will be determined by the length of time spent with the crew and overall skill. Also, owning a ship will start you off with the rank of Officer.