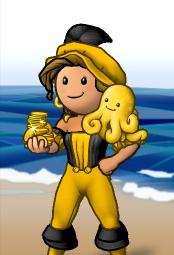 Taserbaby started playing in August 2005, she joined the crew The Crown Of Thorn of the flag, The Crown.

She later left The Crown due to unforseen circumstances and she ended up joining The Jacobite Rebels. From there she married Iamavampire, they made their own crew, European-Elite, and joined New Caledonia, where she was made princess.

Then after some time, and a divorce from Iamavampire, She returned to The Crown where she was made senior officer and princess of The Crown.

Then she left The Crown once again after having some issues with the way it was being run. She then started her own crew with Tarootaroo where she was captain of the crew Pegasus Wings. After a week the crew hit renowned and they made their very own flag Mythology where she stood as queen for quite some time.

After spening some time in Pegasus Wings, then moved on to join with Mskel and the others in Siren's Song under the flag Sea Spell, there she gained the rank lady of the flag.

She spent a number of months in Sea Spell and found herself growing as a person, and met her loving wife Ladadida. She soon joined Ladadida's crew at the time, Backstage under the flag Knights of the Crown.

Herself and Ladadida left Backstage due to a disagreement with the way things were being run. From there, Ladadida went on to be captain and queen of Pegasus Wings and Mythology, and Taserbaby entered into her first Vanguard crew, Suicide King under the ruling of Calais.

Herself and Ladadida married on July 24 and have been happily married every day there after.

She then left Suicide King to join with Depix, Antix, and Bulletproof in Rated Arr, where she was then rejoined by her wife Ladadida.

From there they all went on to merge into Bigbertha's crew Phantom Cutthroats, and she has now been there since.

She spends most of her time with her loving wife, and fighting skellies with the Skellie Hunters Across Viridian

She now lives in Phantom Cutthroats residing in her retirement home on Harmattan with her Wife; Ladadida, Dirtyfoot, Nemor, her tiger; Liebe and her faithful rat; Depix.