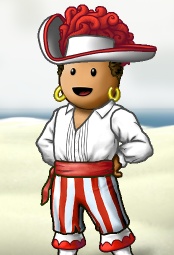 Superguido is a senior officer and poet of the crew Rum for yer Life and king of the flag Qlimax on the Emerald Ocean.

Superguido started his Puzzle Pirates career in the crew Zodiac knights. Animefreak, the captain of that crew, taught Superguido the basic skills. He later was promoted to senior officer. After some weeks, Animefreak's account was deleted and the crew was as well.

Superguido debated leaving Puzzle Pirates. He instead decided to join the crew Starfire. Alyona became his new captain and she taught Superguido how to play most of the puzzles. When Alyona became inactive she gave the crew to Superguido. He rapidly recruited pirates to the crew before leaving.

He joined We like Rainbow as an officer and has since been promoted. By working hard and gaining the trust of his fellow crew and flagmembers he became a titled member in Illusion before he left the flag to create his own.

After leaving Illusion Superguido decided to form his own crew and flag, Qlimax together with Carpaccio. The Lowland Hundred became their first governed island. What started as a small project ended up becoming one of Emerald's most feared flags. Qlimax became the first flag to hold Admiral and Aimuari at the same time on a single ocean.

Superguido's favorite puzzle is Sailing. He is a big fan of economics and music. Superguido and Carpaccio are siblings.