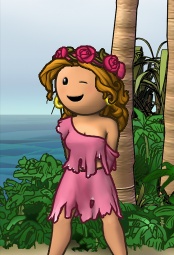 Smergy launched her Puzzle Pirates career on the Sage Ocean in January 2006 on the docks of Lincoln.

She started as a Cabin Person in The Patriots and quickly became a Senior Officer. When The Patriots merged, she made her move to Northstar Revolution where she worked her way up to become a Senior Officer; she is currently Captain of the crew. At the end of August 2006, Onefinger bestowed captainship of Northstar Revolution on her. She returned captainship of Northstar Revolution back to Onefinger to start her own crew, Rated Arrr. Rated Arrr merged with Silent Fools in mid-February 2007. She left Silent Fools in October 2007 intending to be independent, but joined Hugs Not Drugs, to be lazy with some of her closest hearties.