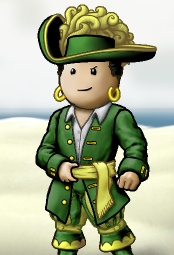 Service sails the Viridian Ocean. He is currently a fleet officer and damsel of the crew Outtamyway and a member of the flag Sea Change.

Service started out life on the Cobalt Ocean on 20 February 2005 as Wolfang, using the seven-day trial. Once the trial ended he discovered the doubloon oceans, where he has remained ever since. Upon starting on Viridian, he became Kingdbs and joined a handful of crews that would take him through two months.

One of these crews was deleted a short time after he joined, so he went with one of the senior officers and a fellow pirate to create a new crew. He became a senior officer, along with Bendaman, in the new crew, Dark Necromancers. When the captain left, Bendaman was appointed captain. Furious with the captain's decision, Service left and didn't play the game again until September, a month later.

As Kingdbs he played solo for a while, working on his stats, until he found the crew Phoenix Calls. There, the captain appointed him senior officer after a month. Soon after that, he was appointed him a royal in both of her flags. By November 2005, he had become the right-hand man of the captain and was even appointed captain himself, although he stepped down after a week. Soon after, he took another break and did not come back until mid-February. Then he played as Kingdbs for a month before deleting his account.

On a new account, he finally became Service and went solo yet again. While jobbing with Army of Darkness, he decided to join due to an enthusiatic crew member named Sineada. In the month that followed, he progressed up to fleet officer. He became royalty thanks to Cangry, but after a blockade of Viridis Island, he was appointed lord. He remained in Army of Darkness until 25 July 2006, when he joined Monyy's crew, fallen angels, as a senior officer.

After a month or so Monyy disbanded fallen angels, forcing Service to become independent once again. After a week he then decided to join Floruit Ab Intra who had originally came from Army Of Darkness along with Service. Upon joining he was appointed senior officer, but due to crew issues he left and returned to Army of Darkness under the captainship of Pinkpimpin. Although due to issues there aswell, he left and became independent and up until 6th of February when he joined Hellas and was made a fleet officer.