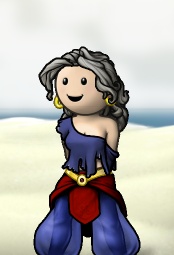 Sedna is a pirate on the Emerald Ocean, formerly of the Sage Ocean. She is captain of the crew Tales from the Deep and princess of the flag Jigsaw Tessellators. She is a captain of the Admiral Island navy in the Gull Archipelago. As of August 2021, her pirate, crew, and flag are dormant.

A career in piracy

Sedna spent much of her early pirating career in the flag League of Light, working with King Kneiss and Lord Ljamethyst. She reveled in activities such as pillaging, recruiting new crewbies, and especially blockading, where she was active as XO, stocking and moving ships, and participating on the Ventrilo flag chat. She was extremely popular and charismatic, with a warm and caring heart, and kind words for all whom she met. Four out of five pirates and landlubbers agree that Sedna was the most just, effective, and successful Executive Officer whom Emerald had ever seen the likes of.

In May 2007 at Amity IX, League of Light contended against Passive Aggression for Amity Island. Sedna's flaggies emerged victorious, and awarded Ljamethyst the governorship of Amity. It was during this time that the pair fell head-over-heels in love with each other.

Becoming engaged in March 2008, Sedna and Ljamethyst embarked on a new adventure: to form a brand-new crew and flag, from scratch, and fill it with hearties and strangers alike. Sedna chose the ominous name "Tales from the Deep" for the crew, and the intriguing words "Jigsaw Tessellators" for the flag, which made some pirates lunge for their English dictionaries. She hailed from Catalonia, and speaks three languages fluently. At this time, the pirate formerly known as Sedna became Seawaterdrop. However, as of 2013, this pirate has been deleted and re-created.

During their tumultuous and brief romance, Sea and LJ continued to build flag and crew to Illustrious fame and added exciting new vessels to their fleet, including the sloop Macabre Pumpkinseed, the longship Precarious Perch, the baghlah Harmonious Bass, the war brig Electric Eel, and the xebec Melodious Bass. Except for Sea's sloop, these vessels had been acquired, renamed, and decorated by LJ, who always had a canny sense of puns, matched with a parsimonious stewardship of rogue marks and Shanghais before them.

Sedna and LJ also frequented the Ice Ocean, where many new features in the server and client were tested before production release. Cephalopod was known to make an appearance on their vessels. Among the testing sessions were swabbie ship transport and a peculiar bug involving war declarations and blockade chest drops.

When LJ went off the rails in August 2008, the relationship soon ended, but the crew and flag endured. Sedna was lifted up and dusted off by Prince Booterken, a kind and gentle pirate who had a likewise caring heart. He wiped away all of Sedna's tears and "made an honest woman out of her", as they say. Sedna stepped down from her role as Queen to become Princess of the very same flag, alongside her handsome Prince.

And they lived happily ever after. Fin?