Difference between revisions of "Reducto" 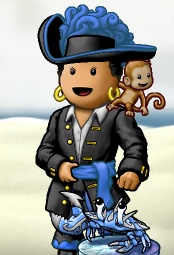 Reducto is a Senior Officer of the crew All for One and a Member of the flag Indesstructible on the Meridian Ocean.

Reducto is a pirate on the Meridian Ocean who is more often known as Red amongst his friends. He is currently a Senior Officer in the crew All for One and a member of the flag Indesstructible. Reducto is known for his sense of humour and is a very energetic and extrovert pirate who is always willing to help his friends, crew and flag.

Although Reducto made this pirate in February 2014, he as been playing Puzzle Pirates since it was at its peak back in 2007. Reducto has been known to play under several names but most people knew him back then by the name - Kroneage

He has been a part of several crews including Squid Squad , Dark Revenge and many more.

Reducto loves all the puzzles but his favourite are Swordfighting, Battle Navigation and Gunning. His favourite pass time inculdes chatting with friends and Poker.