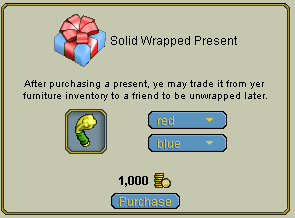 Objects held in a player's inventory can be gift-wrapped. 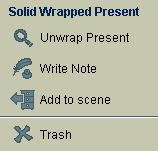 A present is a hybrid between a trinket and an item of furniture.

Presents may be gift-wrapped at the palace shoppe. Items placed inside presents do not decay. A pirate may pose for a portrait holding a present.

There are four types of gift wrap presently available:

All standard colors can be used as both primary and secondary colours for the present. 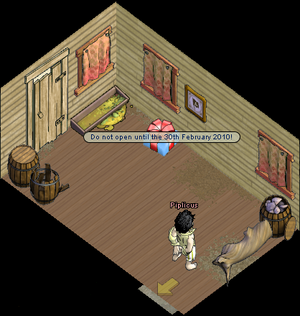 Presents' inscribed notices can be seen when the furniture is placed.

Once an item has been wrapped, the present appears in the player's furniture tab, and may be added to a scene like furniture. Presents may be inscribed, just like trinkets. When placed, a present cannot be opened. However, it will display a special bubble tag in the scene. Please note that if a roommate tries to remove the furniture, it will go back to the booty panel of the pirate that placed it. If a pirate intends for it to be opened by someone else, it must exchange hands through a trade or tournament.

Wrapped presents will always display (new) as their condition when placed in a scene. However, presents never decay, even when placed and moved within a scene. Presents in the booty panel do not display any decay condition.

A present may be unwrapped by opening it in the booty panel. The player opening the present will be notified of the gift via a green chat message.

Once a present has been unwrapped, the wrapping is disposed of.

Prior to release 2006-07-19, items wrapped as presents continued to decay inside the gift-wrap. If the item was fully decayed when opened, it would only last until the player who unwrapped it logged out.

Funny glasses were once able to be wrapped until an unknown release where giftwrap could no longer be used to preserve items one day away from crumbling.