Greedy brigands and barbarians are a special type of enemy brigand, who selfishly hoard bits of treasure for themselves. They have a chance to appear during the melee phase of a sea battle while pillaging, and are identifiable by their extravagant jewelry that they collect and hoard, such as gold eyepatches and flashy necklaces.

Greedy brigands appear more frequently and in larger numbers when there are more new players aboard, and as the booty ramp on a pillage grows larger. They take the place of a regular enemy crew member during the melee phase of a sea battle, and they are no stronger or weaker at fighting than regular brigands. Each of them will have a specific color to which they are susceptible. When players perform large strikes against a greedy brigand with the right type of color, there is a chance of stealing treasure-filled Lavish Lockers from them. 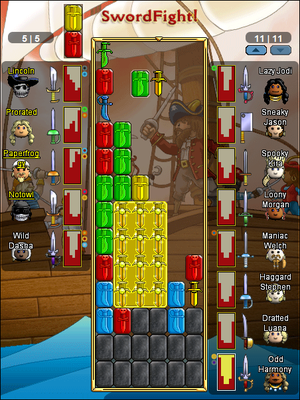 Special yellow block will strike the targeted brigand when cleared

During the swordfight against greedy brigands, the color of the mini-board beside each brigand's face indicates which color strikes they are susceptible to: red, yellow, green or blue. While you have a greedy brigand targeted, fused blocks of the relevant color will have a unique appearance, indicating that clearing it will send a powerful strike to the brigand.

Players should create the largest possible strike using a single block to have the greatest chance of stealing the treasure. Only fused strikes of correctly colored pieces will provide a chance of obtaining treasure; sprinkles and combos provide no bonus or additional effect. 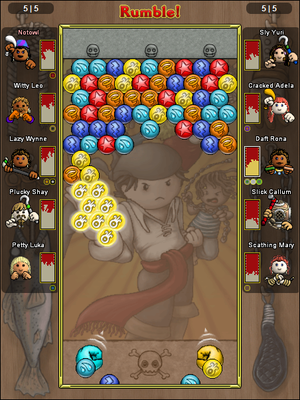 Greedy barbarians work in much the same way as brigands. During the rumble brawl, the color of the mini-board beside each barbarians's face indicates which color balls they are susceptible to: red, orange, yellow, aqua or blue. While you have a greedy barbarian targeted, connected balls of the relevant color will have a unique appearance, indicating that clearing the group will send a powerful strike to the barbarian.

Players should create the largest contiguous group to have the greatest chance of stealing the treasure. Only groups of correctly colored balls that are destroyed will provide a chance of obtaining treasure; drop sprinkles and combos provide no bonus or additional effect.

Lavish Lockers are a type of treasure chest that can be won from greedy brigands. When a player successfully strikes and wins some treasure, a message is shown to everyone aboard the ship, announcing the attacking player and which greedy brigand dropped the locker. Lockers dropped during the fight are added to the ship's booty immediately, so the ship may retain newly acquired lockers even if the melee fight was lost. However, all lockers in the booty chest are vulnerable to being plundered in subsequent battles.

Lockers are distributed to pirates during the booty division based on how many sea battles they took part in. They are known to contain Pieces of Eight, along with exclusive items such as furniture, trinkets, silver chromas, a rare pet, and a rare type of familiar. Greedy trinkets can be exchanged at trading posts for special furniture designs, or for coin purses containing Pieces of Eight.