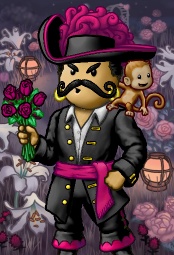 Nefarious' home is the Obsidian Ocean though he began on Emerald/Viridian. Nefarious enjoys familiar winning, drinking tourneys, inn tarting, Kraken Hunts, and Spades. In his spare time he also tries to bribe Emerald players to join Obsidian by throwing various amounts of poe and weights of fams at them.

Nefarious began his pirate career over 10 years ago. You may think you're safe, but he will remember who you are and your name, and use it at the most unexpected times. He also loves Kingscashs and will do anything for his entertainment.