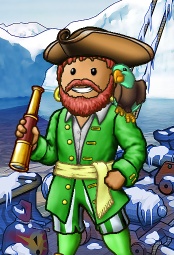 Monty is the founder and captain of the Black Hearted Scallywags on the Emerald Ocean.

Monty has lived a life both on shore and on the ocean. Beginning in the days of Sage some time in late 2006, long before the great merge, Monty partook in the all that pirate life has to offer. Blockades, Hunts, Skellies.

Monty is also a teacher though so time on shore became very busy and for many years Monty and the Black Hearted Scallywags have waited in port for their leader to sail on again.

And again he is back! Monty rejoined the Emerald Ocean early in the pandemic and has been sailing on and off since.