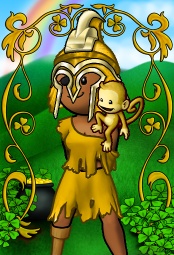 Mazi is the former captain of the crew Le Crew, and was also the monarch and co-founder of the flag Guapo Papi (now Intersan Telmi) on the Cobalt Ocean.

Mazi washed up on the shores of Mermaid's Purse in God knows what year, she has been playing for a long time. In fact she has the Fifth Order of the Jolly Roger on one of her oh so many pirates (no life). She has a thing for 4 letter names seeing how she named her main pirates Mazi, Bulb, Jumo and her rat terrier Abby. Coincidence? NU UH!

Pirates do not really know how many crews Mazi has been in but somewhere around late 2008 she joined Le Crew. There she hung out with some of her current BFFs such as Jezus, Prosperity, Professor, Hohumdiddly and Gooblenka.

Professor and Mazi did not get along well at first and didn't really talk much besides the usual "AHOY MATE!!" and the occasional "YOHOHO!!!". However, they developed a strong bond over the hatred they both shared for hair cancer.

With Gooblenka's retirement, Mazi was assigned the title of captain of Le Crew, however it started to slowly die after her departure and its members left one by one. Mazi decided to leave her friends and join FREAKSHOW.

Mazi manages many many stalls and shoppes but she does not actually do any work on them. They do look very pretty on her pirate page though. Mazi is a kind soul and she helps out her broke/retired friends with their respective stalls rents. Therefore, she is Shirley.

Mazi can usually be found defending on Sea Monster Hunts, doing CI trips or fake ZZZing Sawkins-style when caught in an awkward situation. She likes all the puzzles except rigging. And treasure drop. And distilling. And blacksmithing. And weaving.

Mazi is an avid fan of POKEMON JOKE HOUR!!!.

Mazi has some crazy booty shifts in real life so her playing schedule is very random but she's usually online at least for a while everyday.