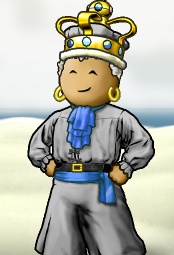 Marinko entered the Hunter Ocean formally on July 6, 2006. Having been active on the Sage Ocean since around January 2006, much of his activities on Sage before August 16, 2006 remain unrecorded and are a mystery. Marinko also goes by the nickname Mink. New information has been discovered reveiling Marinko's arrival on the Sage Ocean to be on January 19, 2006. Marinko has created a system that would make it easier to communicate Battle Navigation manuevers to another pirate.

On the Sage Ocean, Marinko started his commanding career as an officer in the long forgotten crew, The Killer Muppets. He was left to return a cutter back to a colonized island. Never having been trained, he sailed the ship back safely to Greenwich Island and successfully plundered all the ships on the way. Marinko moved on to several new crews after the collapse of The Killer Muppets and found his way to Get Rich or Die Trying. Achieving the favor of the crew quickly, he made his way up to senior officer rank and stood beside Kingring and his senior officers.

The disappearance of Get Rich or Die Trying is a mystery, but several members from that crew reunited and formed Golden Loyalty Sails, led by Adham. As soon as Adham left the ocean for unknown reason to return at a later time, the collaspe of Golden Loyalty Sails began. Realizing this, Marinko left and started his own crew, Shadows of Loyalty. There, he served as royalty of the flag, Black Moon. Having to deal with a failing crew yet again, Marinko left the crew to another and began to wander about the ocean and eventually made his way to the Hunter Ocean, where the records of his ordeal begin.

Marinko appeared on the Hunter Ocean and became an officer of the Crimson Seablades. A week later he was promoted to fleet officer. He remained there until July 24, 2006, when he was reunited with his old captain of Get Rich or Die Trying on the Hunter ocean. He joined him and became fleet officer of The Irken Armada on the Hunter Ocean. His future seemed dim upon the crew and he left along with a fellow pirate to a fledgling mercenary crew and was welcome heartily. An hour later he was back in Crimson Seablades were he feels he belongs. On August 16, 2006, Marinko returned to the Sage Ocean and rejoined his old captain Adham in the crew, Golden Loyalty Sails. Marinko became king in a dying flag, and revived it under his leadership. Golden Loyalty Sail later changed its name to Shades of Liberty. During that time, Black Moon tended to show promise as Marinko rallied the flag together. Hitting a bit of turbulence, on December 13th, 2006, Marinko exchanges the throne for the cabin with his close friend Artfulsword and took the position of captain of Shadows of Loyalty and making Artfulsword king of Black Moon. Early in January 2007, Marinko retook the throne to try once again to bring about greater glory to the flag, Black Moon. Soon after, Marinko and Adham decided to move Shades of Liberty into Illium Eternae where Marinko was a prince.

On September 27, 2008, Marinko retired from piracy. Marinko ended his career as Senior Officer in The Sons of Jor-El and Lord in the flag Phantom Zone.

As of December 2008, Marinko spends his time as a landlubbing merchant, managing a distillery producing rum for the island of Greenwich on the Sage Ocean.