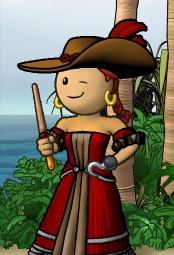 Madmads arrived on Sage on 14th December 2006. Dazed and confused she roamed the ocean, never settling in a crew for very long.

After a while she decided it was time to get serious: She wanted to be in a crew and she wanted to become an officer. It was then that she remembered one of the first crews she ever jobbed for: Shooting Stars of Sage. They offered training to become officer and were a friendly bunch, so she joined up.

With a propensity for brown and maroon, Madmads can often be seen fighting brigands and barbarians on the Sage Ocean in her sloop, the Magnificent Madi, or her baghlah, the Majestic Madalena. Otherwise she can be found smelting iron in her ironworking stall on Greenwich Island.