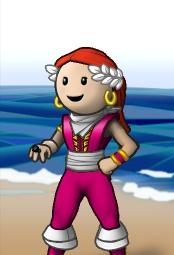 Lucafira is a senior officer and siren of the crew Lunatics' Refuge, and the queen of the flag Lunatic Asylum. She calls the Sage Ocean her home.

Lucafira is an active member of the following organizations:

The Story of Midnight

Lucafira spent her greenie days roaming Midnight, calling Oyster Island her home. She got her start Bilging with the navy until she was discovered by Lilredhen, the captain of Chaos Theory. She joined Chaos Theory and spent several months there, lavishing the little money she made on the occasional piece of furniture for her shack. Though the crewmates of Chaos Theory were very friendly, and Lilredhen had taken a shine to Lucafira, she decided to leave the game for a while.

When Lucafira decided to return to the game, she moved to Sage and found herself on Greenwich Island. She again lost herself in the navy, bilging her way through several ranks. A few weeks later, she was dockpressed into joining the crew Flames of Passion. She stayed with them for quite some time, but the crew didn't have the same friendly feel that her old crew on Midnight had. She tried to adapt to the differences Sage had from Midnight, but became overwhelmed. With that, she set the pirate life aside again.

When she returned again, Lucafira found herself crewless -- Flames of Passion had expelled her during the time she was away. Not entirely surprised, she resumed work in the navy and amused herself on land with Swordfights. She had a general knack for the sport, and this became her favorite pastime. Her former real-life boyfriend started to play, and the two owned a cabin on Greenwich together for quite some time. However, he retired, and the cabin was sold. Lucafira moved to Descartes, bunking in a row house with an acquaintance.

One day, she found herself jobbing for Kneiss of the crew Poseidons Tricorne. After three consecutive pillages with them, she joined them full-time. She deeply enjoyed the company of her crewmates, and became very good friends with Kneiss. However, as time wore on, she became more ambitious. She worked hard to raise her stats so that she could rise through the ranks, learning that she was much better in Sailing than Bilging along the way. However, her work only got her to the ranking of pirate. She learned the hard way that Poseidon's Tricorne was a very elite crew, and she didn't quite fit in.

Lucafira left Poseidon's Tricorne to try her luck in Cielo Ardente. Upon her joining, she was given the rank of officer. Cielo Ardente seemed like a good place for her to be -- she had the rank she desired and she was still with her friends. She became very close friends with Jeanie, as well as several other of her new crewmates. She had moved several times during the process, bouncing around islands until she earned enough money to own her own cottage, located on Admiral Island.

Jeanie soon began discussion of potentially leaving the flag, League of Light, and Lucafira wanted no part of it. So a friend of hers, Thesteve, invited her to join the crew Tide Hunters. While in Tide Hunters, she became more of a carouser than a sea-faring pirate, and poker became her dangerous addiction. Ultimately, though, she did not fit into Tide Hunters that well and left to re-join Cielo Ardente. Jeanie was still talking of leaving League of Light, and Lucafira constantly tried to convince her not to. The two argued constantly, and finally Jeanie expelled her from Cielo Ardente. Feeling her pride severely hurt, Lucafira decided not to return to League of Light.

Her close friend, Jevil, had kept up with her situation and offered her a place in his crew, Loves Sweet Revenge. After speaking with Schrapnel, the crew's former captain, she joined the crew and settled right in. Not long after she joined did she obtain her first ladyship position for her efforts with politics. She was thrilled and enjoyed her time in Omnipotent Entente, until Schrapnel announced a change in flags. Leaving the crew Summer Breeze in charge of Omnipotent Entente, Schrapnel created the flag Project Mayhem.

Upon the creation of Project Mayhem, Lucafira had been told she would receive her ladyship back once the flag was underway. This would never occur. She brought this to Schrapnel's attention, who instead ignored her questions and requests. In frustration, she announced that she was leaving Loves Sweet Revenge. She tried her hand at many different crews over the next few months, but eventually returned to Loves Sweet Revenge after the captaincy had been handed over to Chelseame.

Project Mayhem eventually disbanded, and Loves Sweet Revenge joined Barbarosaa's newly formed flag, Hook. This would be where Lucafira would obtain her first position as royalty, nominated to the position by her captain. Lucafira was quite pleased with the way things were going: She was back in her old crew with a political position in the flag. Two weeks later, though, Barbarosaa would tell her to step down and give her position to a fellow crewmate that had been promised the position -- but also did not want it. Insulted, she left Hook and refused to return to it.

Sometime later, Loves Sweet Revenge left Hook to join Peglegupurbu's flag, Scupper Off, where she was once again nominated for a royalty position. That flag also fizzled quickly.

Loves Sweet Revenge was soon renamed Lunatics' Refuge, in order to eliminate memory of its previous state. Chelseame, along with Dashriprock and Lucafira, created the flag Lunatic Asylum, where the crew resides to this day. It was unanimously decided that Lucafira would be its monarch, and she has been its queen since the day of its creation.

Nowadays Lucafira can be found either lurking in her townhouse amongst her pets or docktarting on Admiral. Rarely, she can be found sailing in blockades or on sea monster hunts, but for the most part she has retired from seafaring and more time on the social aspect of the game.

Except for Silfueria, all of Lucafira's dogs are named in honor of the many friendships she has made.

Despite owning all the pets in her own name, Lucafira claims "joint ownership" of the pets with her boyfriend, Fearlessphil.